The day we all dressed as the nativity

On Saturday I ventured into trying something new.

As you might know if you have read this blog for a while, every year XLP runs a mission trip for the people who come on the gap year course. For the last 10+ years we have been visiting a community in Ghana and this year we are going back. However, we are also simultaneously running a trip to Romania too.

Because I have quite a large team they have split and half are going to Ghana, half to Romania. But for them to go they need to raise lots of money.

Soooooooo I had a brainwave! Why not go busking on South Bank?! People do it all the time and must get good money because otherwise why would they go back.

So on Saturday my team dressed as the nativity and went to busk on South Bank. 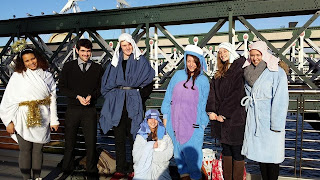 Clearly you can see the high quality costumes we were fashioning. Ahem.

We spent about an hour and a half carolling and singing any Christmas Carol we could remember to raise cash. We had to move to different locations seeing as it turns out you need a license to busk on South Bank (however you can do it on bridges, in parks and outside the National Gallery without one). But thankfully it was a really nice day so we got the chance to sing, raise money and see a bit of London.

Once our throats were dry we called it a day and counted our earnings - £23.28

Not as much as I had been anticipating, however considering our carol singing wasn't the most tuneful or coherent I'm not hugely surprised.

It was hilarious seeing how people looked at you a little bit weirdly, but then really appreciated the fact we were singing and raising money for other people.

Probably the most moving thing was when two homeless guys approached us to ask what XLP is and why we were singing. We told them and then they told us they had sold a big issue and so gave us a quid each. It almost stopped me in my tracks. Why?! Why did they do that? Its so bad but I know I fall into the trap of thinking homeless people are all addicts and so don't use money well. This totally challenged that mind frame and has made me reassess my own viewpoint.

Busking - not sure I'm cut out for it on a regular basis. It's quite boring, cold and doesn't necessarily deliver what you were hoping for.

However, my team are now over 1% of the way to their fundraising target!