This last Sunday I was lucky enough to see my youngest brother get baptised. Now people have lots of ideas about baptism, what it is, why you do it etc...so I just wanted to spend a few moments talking about why he decided to get baptised and why over 14 years ago I got baptised too.

So first of all, to clarify, we are talking about full immersion baptism (otherwise known as believer's baptism, or "the real thing"); not christening or infant baptism where you get sprinkled with water. Here, you go fully under the water, to symbolise leaving your old life behind (dying), and then come up out of the water to symbolise the fact you now have a new life (being raised).

On Sunday my brother Dan told the whole Church that he was getting baptised because he had seen God's power in his own life and wanted to live the life that God wanted him to live. It was so flipping powerful - like he's 12, and he was really eloquent in why he had come to make this decision. So my parents baptised him.

It wasn't just him who got baptised on Sunday - 3 others from the youth group went for it too. In a world which rarely praises young people I was SO proud of them for being brave enough to publicly say that they loved God and wanted to live for him.

It made me reflect a bit on the journey I have come on since getting baptised myself. I got baptised when I was 11 after deciding that I wanted God to be in control of my life because I figured he knew better than I did. It was easy to say that as an 11 year old, most people knew better than I did...growing up it got harder to allow God to stay in control. You see developing a relationship with God is kind of like a graph like this: There are definite high and low points. Places where you feel incredibly close to God, and times when you wonder whether he really exists at all. Times when you have lots of questions and can be prone to doubt, times when your faith is unshakable.

I have learnt so much about God, who he is, what his heart is, what he asks from me over the years and it is pretty epic looking back and seeing how much he has changed me into the person I am today. 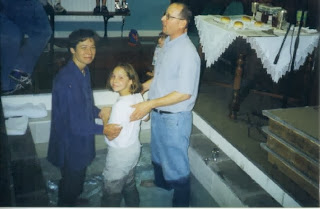