WARNING: This post uncovers a very geeky side to me that some of you may have not seen before. PLEASE DON'T JUDGE ME!

So about 10 days ago I was meandering through a charity shop with a couple of my friends who were on a "cheap decorations mission". In charity shops I normally gravitate towards jeans (because people throw out perfectly decent pairs of jeans that have years of life left in them), or books (like I don't have enough already). However, on this particular occasion one of my friends pointed out a board game to me...I think as a joke. Nevertheless, I was transfixed and wouldn't leave the shop until we had got it down and opened it up to see what it was.

The game was Bible Challenge. 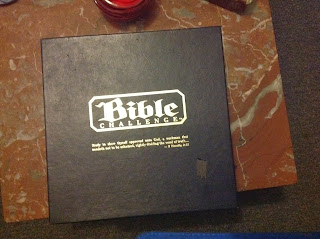 Now, I didn't actually buy it then as the people I was with thought I was a right lunatic for even considering to purchase such an item. I went back and bought it on Sunday because I had been thinking about it all week. Ha!

Right so at this point I want to give a bit of a disclaimer:
By choosing to read this blog you are choosing to know the real Naomi Allen. The one who is weirdly eccentric with hints of Phoebe from "Friends"; the one who has a strange sense of humour and tends to laugh at her own jokes. The Naomi who looks to appreciate the little things, who often gets things wrong and who is unashamedly Christian.

Phew, so now that that is out there I feel vaguely better about introducing you to this wonderful game. So basically it is a board game which tests your Biblical knowledge in a number of categories - think Trivial Pursuit but very Christian. The aim is to get a question right from each of the 7 categories: 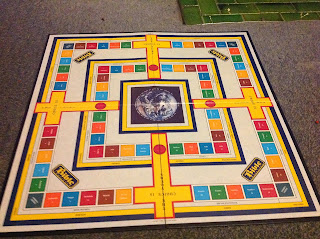 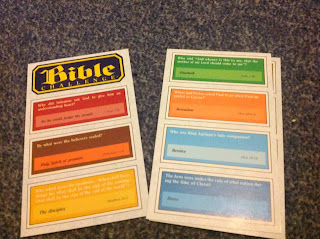 Once you get a question from a category right you get the corresponding colour ring and once you have all the rings, you have to answer a final question about the life of Christ to win. 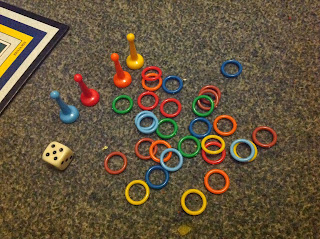 Now, I know that it sounds weird that I actually enjoy this game but I genuinely do! I brought it home to play with my family and it has been hilarious and a great way to see where I should be reading up in the Bible (clearly not just to win the game, generally too!) I think I like it because it proves to me what has gone in when I read the Bible and what hasn't.

What has baffled me is that I have shown this game to a number of Christians who have just balked at such a game. Clearly if you aren't a Christian/don't know the Bible I probably would not recommend this to you (for obvious reasons); however, I don't get why a Christian wouldn't want to play something that, not only is fun (I love competition of all sorts), but also is helping you learn more about God's word.

To be honest it's other peoples reactions to the game that have made me a bit apprehensive about blogging about it incase people think I'm some kind of really uncool Bible geek (which I'm not sure is a bad thing). The thing is I am still the same Naomi! I am under no illusions that this is clearly not the coolest thing to be proud of; but I love games and I love the Bible...this then is a winner of a game for me.

If anyone wants to play let me know!