I love buses. I genuinely do. I love the fact that living in London means I can hop on a bus and get pretty much anywhere for an incredibly decent price. I love the vibes you get on buses - the snippets of conversations you hear, the random people who get up and start preaching, or shout at you to move down inside the bus.

I have often confided in people (generally those who I'm ok looking like a geek in front of) that I would love to conduct a study into demographics on different bus routes and compare on a double-decker bus who sits where...like would a 60 year-old black woman choose to sit in the same place 15 year-old white boy. I know that sounds really sad, but it's something that interests me.

Today as I was on the bus a man came and sat next to me. He looked pretty normal...but he smelt. He smelt pretty bad - BO and urine mix. And to be honest I was disgusted. I was trying to do the thing where you keep the same face but try to breathe through your mouth...and failing.

And then I was hit by a wave of guilt for not "loving" the smelly man. God calls us to love everyone, especially those on the edge of society. But how could I?! I mean I could barely breathe next to him, let alone love him. I wanted to be able to love him and be totally accepting, however...I didn't.

So I got off at my stop breathing a fresh sigh of relief and carried on my day not thinking too much of it.

But as the day has worn on I've been struck by something. I work with young people and some of them stink. If it's not adolescent BO, it's the putrid smell of weed, or just general dirtiness. But I do love them. I will gladly sit next to them and (appropriately) hug them; I'll chat to them about their lives and help them when I can.

So what is the difference between the kids I work with and the random stinky people on the bus? Well I know them, I have relationship and history with them. I know a bit about their homes and essentially I cut them slack. Sometimes that's because I know they're from a dysfunctional family and haven't necessarily been taught the joys of showering. Sometimes it's because their water has been cut off or they don't have access to a washing machine. Sometimes everyone in their family is smoking cannabis so there is no way they can escape the smell that lingers with it. I guess I can see past the smell. And to be honest sometimes it's still hard with them...I thank God that he does give me strength to invest in those relationships.

I think God has challenged me about how I view smelly people. For all I know these people might not have access to washing facilities and so they can't help it. Who knows maybe they were once a kid who was never taught about it. But whatever it is there is a story to them. They have a background and a context which they fit into, that no doubt explains why they are the way they are.

I guess next time I come into contact with someone who's personal hygiene could do with some work I'm going to try and remember that there is a bigger picture. That there are probably a load of circumstances that have brought that person to this point in this state.

I don't want to dismiss people just because of their outward demeanor - there is clearly far more to them. Would God help me have his heart for his people.

Recently I have been amazed to see how prayer genuinely works. I mean I have been a Christian for many years now (like 13 at least) and yet the truth that God listens and answers us is still massive!

Part of these answers are potentially because at work we started the year looking at things we wanted to aim for in 2013 and one thing that my group came up with was that we wanted to be more "expectant". Like we are all Christians and we believe that God is who he says he is - all powerful, all knowing, all loving - yet we rarely ask or rely on him. Well for myself, I often will know my own limits and yet will refuse to trust that God can do more than I can. So if I know I have a particularly challenging young person it's not my natural response to pray that God would take over. My natural response is to try my best with the young person and hope that it's enough.

Well anyway being more expectant has meant praying in a way that invites God into situations rather than just asking him to bless things. Trying to let him have control rather than dictating what will happen.

So really it shouldn't be too much of a surprise that this week we have seen a number of answers to prayer:


There have been other answers too but these are the ones that relate to things I have been specifically praying for. Other people in my team have been seeing answers to prayer as well.

I guess answers encourage us to pray more and be more expectant. I find it frustrating how sometimes my lack of faith that God will do anything almost holds him back because I don't hand it over to him.

There is a story in the Bible that encourages me in times when I feel lacking in faith:
"And someone from the crowd answered him, “Teacher, I brought my son to you, for he has a spirit that makes him mute. And whenever it seizes him, it throws him down, and he foams and grinds his teeth and becomes rigid. So I asked your disciples to cast it out, and they were not able.” And he answered them, “O faithless generation, how long am I to be with you? How long am I to bear with you? Bring him to me.” And they brought the boy to him. And when the spirit saw him, immediately it convulsed the boy, and he fell on the ground and rolled about, foaming at the mouth. And Jesus asked his father, “How long has this been happening to him?” And he said, “From childhood.  And it has often cast him into fire and into water, to destroy him. But if you can do anything, have compassion on us and help us.” And Jesus said to him, “‘If you can’! All things are possible for one who believes.”  Immediately the father of the child cried out and said, “I believe; help my unbelief!” And when Jesus saw that a crowd came running together, he rebuked the unclean spirit, saying to it, “You mute and deaf spirit, I command you, come out of him and never enter him again.”And after crying out and convulsing him terribly, it came out, and the boy was like a corpse, so that most of them said, “He is dead.” But Jesus took him by the hand and lifted him up, and he arose. And when he had entered the house, his disciples asked him privately, “Why could we not cast it out?” And he said to them, “This kind cannot be driven out by anything but prayer.” Mark 9:17-29

This story of Jesus healing a demon-possessed boy teaches me a few things:
1. Belief is key in God working - If I really and truly believe and trust in the God I say I do I have no reason to not believe he will work.
2. Even still when there is an element of unbelief God is gracious and can still work
3. Prayer is SUPER important - check out that last verse. Some things can only be battled with in prayer.

I'm hoping 2013 will be a year where I understand a little more what prayer is and what it should look like.
Posted by Naomi at 10:24:00 am No comments:

Not so New Year

So I am actually really excited as I sit and write this because I have been meaning and wanting to blog for ages. Various things like wanting to speak to people and not knowing where to start have held me back but I'm back on the bandwagon.

I thought I'd start this New Year post with an update on my thoughts, actions and general bumblings just so then next post you can all understand where I'm coming from. 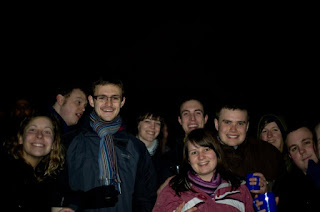 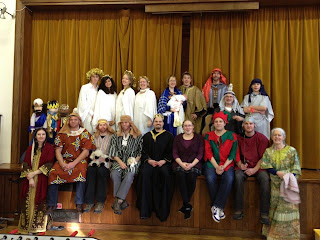 I think looking over some old blog posts has led me to think I am becoming more reflective and actually enjoy having space to think things through even though it's not a natural trait with my personality.

Anyway that is me for now.