Today at my Church we were talking about how sometimes when you make resolutions you find that you fail to keep them in the first few days, let alone the whole year. 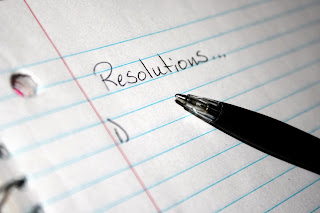 I have for a while had my suspicions about New Year's Resolutions. There is quite a big build up and generally a bit of a binge before New Year's Eve. I can remember when my resolution was to go running every other day and I made it for 2 days before giving up when it was a bit wet outside.

You see I like the whole idea of starting something new at the beginning of a year. It's like I love using December as my month of reflection and then January is a month of goal setting/creating aims for the year. However, I don't ever think you should wait until the New Year to start something good.

For instance I can remember when I wanted to read the whole Bible but it was about May and so I waited until the January so that I could do the official Bible in a year reading plan. Now, ideally I would have just started then and gone with it. Why waste time?! Far too often I am one of these people that has to wait to start something at the beginning of a year, a month, a week, a day, an hour, rather than thinking..."hmm this is a good idea let's go for it". This reminds me of how when I was at university I would be writing essays and I'd take a break and always say I'll have 10 mins...now if I forgot to look at the clock and it had been 11 mins I would then choose to wait until it had been 15 mins before getting on.

This year my Dad asked me for an Inspirational Calender (he gets one every year), however I looked all over in London and couldn't find the one he would normally get. So I had to resort to being creative and adding inspirational quotes to a standard calender (it is actually an Amazing Earth one which has some pretty stunning pics in it). A couple of the quotes I chose really stood out to me.


"The wise does at once what the fool does at last." Balthasar Grecian

"It is never to late to be what you might have been." George Eliot

Now I don't want to be someone who waits and puts things off until a "good time". I don't know who but someone said "there is no time like the present" - New Years is a good time to start things, but so is today!

So as I think about what I want my goals/aims for the year to be, one of them is going to be to start good ideas straight away. The rest I'm thinking about.
Posted by Naomi at 6:43:00 am