From my last few posts you might be thinking that I have become a manic depressive...and this post is to prove that that is NOT the case.


This last weekend was a bank holiday and as such it was the annual "Old Girls" Cricket match. I travelled back to Aberystwyth to take part because it was my first year as an old girl and I was looking forward to playing my first game in over a year. Many of you may not know that before Aber I hadn't really played cricket before. My friend Claire wanted to join the club and wanted someone to go with so I said I would go. LOVED IT. 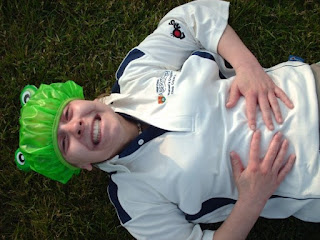 This is in fact the only pic I can find of me in Cricket kit. and I believe it was a day when I was doing a forfeit for some reason and so had to wear the frog shower hat ALL game! 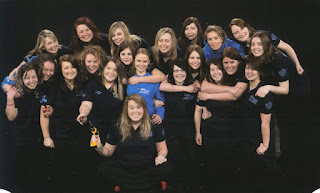 This was our team last year before I left. Quite a crazy bunch of characters. I think that's what I liked about the club. There were people on it who apart from cricket had literally nothing else in common and yet we all became really good friends. There is always lots of banter in the club about who's doing what and who made an idiot of themselves when and while I think in other clubs that could potentially get quite bitchy - I think we had a good boundary of just wanting to have a laugh at ourselves and each other. Everyone had a bit of a crazy streak... 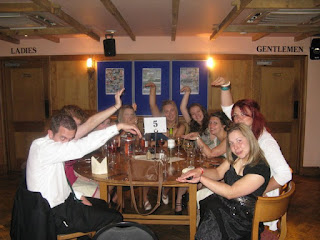 ...as this picture shows...! Ever heard of awkward animals? Well I am sporting the "awkward turtle" see if you can distinguish between the elephant and the giraffe.

Anyway, for the first time in a long while the Old Girls beat the current team. It was a very fun match (I took 2 wickets which made me happy) and was so good to see some of the girls again. It's a tradition that the night before the game the Old Girls and current girls go out and have to match each other drink for drink. Not going to lie this always makes the game a bit more interesting to see who will vom on the pitch and who will make it to the boundary but we did well this year. Thankfully I missed that part. We also go out the night after the match to celebrate/commiserate - while I am no advocate of getting drunk, I do really enjoy the chance to spend time with the girls and enjoy a fun night with them. One of the pubs was open til 6am for us...I left at a respectable 3am and was met for breakfast by someone who had stayed until 5:30....insane!

Aberystwyth still has a lot to charm me. Despite being different every time I go due to various people coming and going, it still makes me happy to be there. I love the sea. I actually love it - every time I'm there I have to go see it and just breathe in the sea air. Sounds weird but I find it so refreshing and just peaceful.

Cricket and Aber - two things to cheer me up